As a world leader in food production, the future of Australia’s agriculture sector is promising, but it faces many challenges. On one hand, a meaningful increase in agriculture exports is expected by 2050 while on the other, the sector will likely reckon with significant long-term climate change risks that will need to be managed.

According to the CSIRO[1], the ability of Australian agricultural businesses to remain globally competitive was found to strongly depend on the proportionate cost of energy. The cost of energy as a proportion of production costs in Australian agriculture has significantly increased in recent years and impacted the costs and profitability of agricultural businesses. Thus, access to affordable reliable energy is necessary for the continued sustainability and enhanced growth of the sector.

Considering these facts and the potential development of new energy markets, the Queensland Government released the Hydrogen Industry Strategy in May 2019, highlighting its commitment to delivering a sustainable hydrogen industry by 2030 and providing opportunities for domestic users while developing new export markets. The strategy focused on renewable hydrogen, otherwise known as green hydrogen, which is produced by renewable energy or from residual biomass.

This article aims to provide a quick overview of this versatile energy carrier and the potential opportunities for its development in Queensland and the Queensland agriculture sector.

Hydrogen is a basic element in the universe, most commonly existing in water. With industrialisation, more and more artificial hydrogen is being produced which plays an important role in building human society.

In general, hydrogen is produced in several methods: 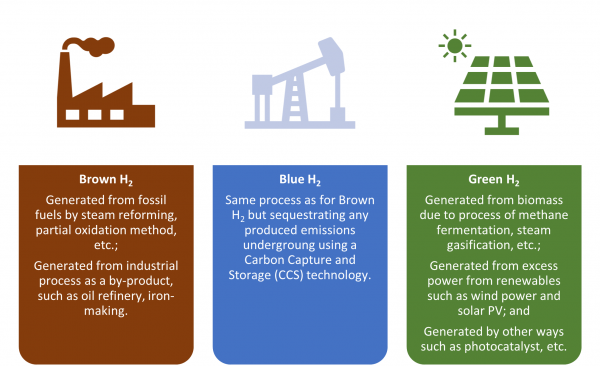 The appetite to explore hydrogen as an energy carrier is growing pace, with billions of dollars being spent worldwide – $500 million in Australia by 2030 as per the Technology Investment Roadmap[2] – on pioneering projects to integrate hydrogen in energy markets.

Access to any of these markets will strongly depend on two main factors, the H2 production rate and the cost of H2 production with an established target cost of AU$2 per kgH2 in Australia.

Shortly after his appointment, the Minister appointed two new Hydrogen Champions, Member for Mundingburra Les Walker and Member for Rockhampton Barry O’Rourke, who are responsible for spearheading the development of the Queensland hydrogen industry.

There has been a progressive commitment among farmers to invest in energy efficiency and renewable energy technologies with 40 per cent of farmers generating some renewable energy on-farm[3].

The increasing challenges of remaining profitable as a result of increasing energy prices and reliability issues have resulted in agribusinesses increasingly implementing efficiency measures, and off-grid or alternative energy solutions in an attempt to gain control over energy prices.

With farmers increasingly adopting renewable energy technologies and representing one of the major users of energy in Australia, there is a potential opportunity for H2 to be generated and implemented on-farm if the H2 industry continues to develop as expected. 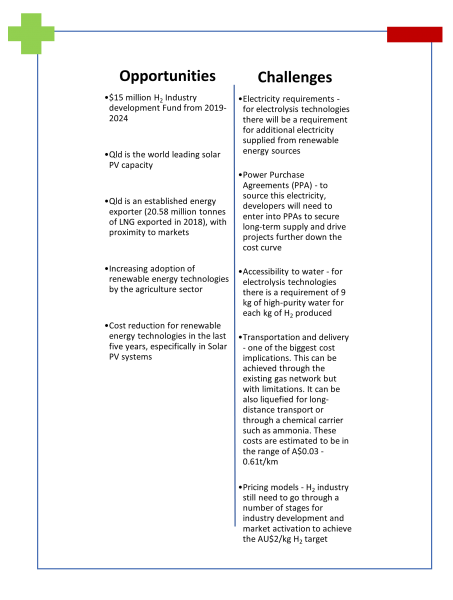 By 2030, Queensland hopes to be at the forefront of renewable hydrogen production in Australia, supplying an established domestic market and export partners. Considering these targets, the projects that are currently under development in Queensland are as follows[4]. 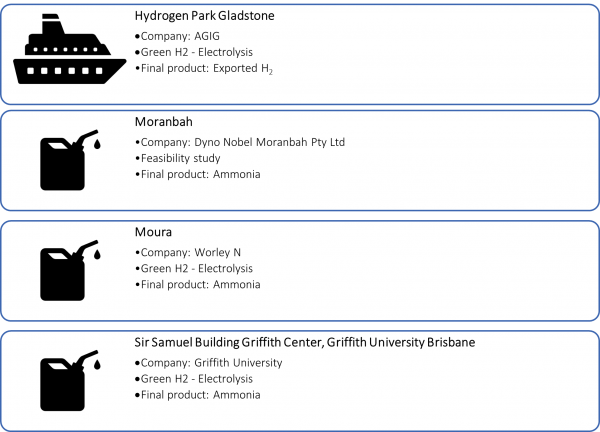 H2 is enjoying momentum in Australia and despite its infancy, with the right policies and the successful development of a H2 hub, Queensland can embrace its growth to accelerate commercial production, reduce its carbon emissions and the base costs of energy within the region.

Other industries have already begun assessing the feasibility of producing H2 and developing diverse pathways for its adoption. For the agriculture sector (one of the main consumers of energy in Australia) a detailed understanding of the conditions that need to be presented to drive down the costs including the definition of a realistic pathway and timeline of full-scale commercial operations is important for a real commitment to address the risk associated with climate change and the continuously increasing energy costs.

Read our earlier article about the potential for Hydrogen on Farm here.

If you found this article helpful, we think you'll love these
5 Aug 2022
Energy Savers

Farmer participants in the QFF Energy Savers program have reported real savings after going ahead with the recommendations of their energy audits. These savings have been Measured and Verified...
Read More
5 Aug 2022
Energy Savers