Earlier this week the Queensland Farmers’ Federation (QFF) and its members were joined by several ministers and senior staff from the recently re-elected Palaszczuk government as the organisation formally commemorated its 25th anniversary.  The official milestone date was in November 2017, but the state election followed by Christmas delayed the festivities.

The informal dinner was an opportunity for QFF, industry members and government to reflect on the organisation’s vision, achievements and future direction.  It was also an important time to consider how and why the current QFF was formed in the first place.

QFF as it exists today, was formally established in 1992 with the express purpose of providing a single voice for the diverse agricultural industries that operate in the state, so they could more effectively advocate for sector-wide issues with a unity of purpose.

The creation of QFF saw the unification of the Council of Agriculture (COA) (1922-1992), which was made up of 18 constituent members that were predominantly former agriculture statutory bodies, and the Queensland Producers’ Federation (QPF) (1969-1989), which was a broad coalition of agricultural commodity groups including cane, grazing, dairy, horticulture, grains, commercial fishing, and the COA.

In 1989, QPF initiated a transition for the merger which resulted in the QFF of today operating from 1992.  In 2008, QFF formally welcomed irrigated agriculture into the fold when the Queensland Irrigators Council (1999-2008) was absorbed into the peak advocacy organisation. 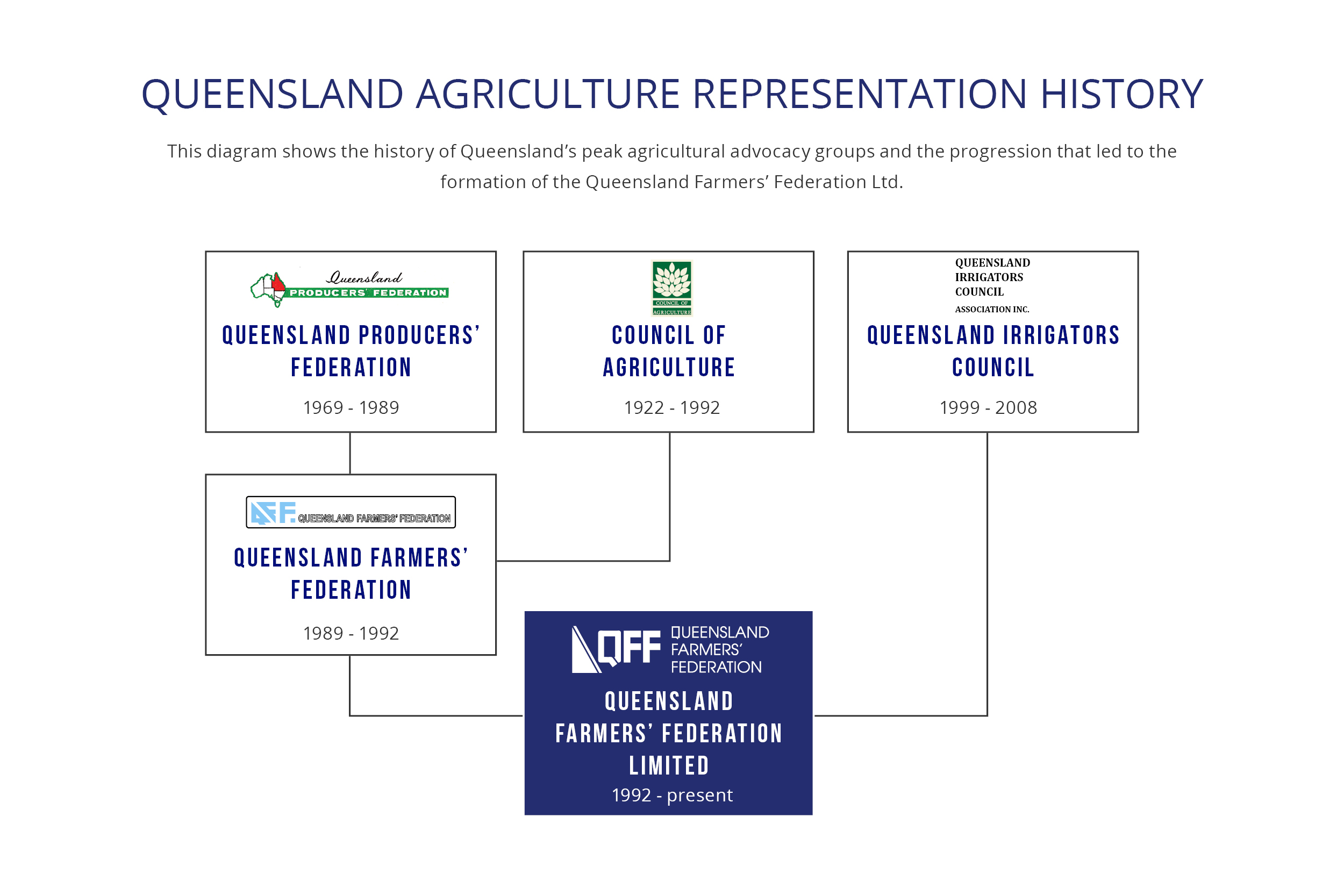 After 25 years, QFF has much to be proud of and currently brings 14 industry organisations that represent 9 agricultural industries (cane, cotton, production horticulture, lifestyle horticulture, chicken meat, dairy, pork, eggs and flowers) and the state’s irrigation groups together under a unified umbrella organisation.

Without these members, QFF would not exist.  Each of them have and continue to contribute to QFF’s success and effectiveness as the state’s most trusted peak agricultural advocacy group.

The modern version of QFF was driven by a shared vision from advocacy groups wanting to unify the state’s agricultural representation.  The model they set up is still the best option for bringing all organisations that represent farmers in this state together.  Organisations sitting outside the unified QFF umbrella should ask themselves how they are currently contributing to a collective vision for the sector and why they don’t want to be a part of that.

As a non-partisan advocacy group, QFF will continue to work with government of all persuasions.  It will continue to strive for the right policy settings and effective collaboration between industry, government and the community to help overcome the challenges and realise the opportunities ahead.  Striving for a framework that encourages productivity and profitability while enabling us to deliver on our environmental and social obligations will ensure present and future generations continue to be competitive with farmers around the world.

The vision of the founding advocacy groups is alive and well in the QFF family.  A strong unified voice for agriculture is good for our farmers, industries and the state.  The more unified our sector is, the more powerful it is.  By pooling resources and leveraging the strengths and expertise in different industries, we can deliver better outcomes.  In doing so, we also demonstrate to farmers that membership of their industry organisation is more than just another cost, it is an investment in their future. 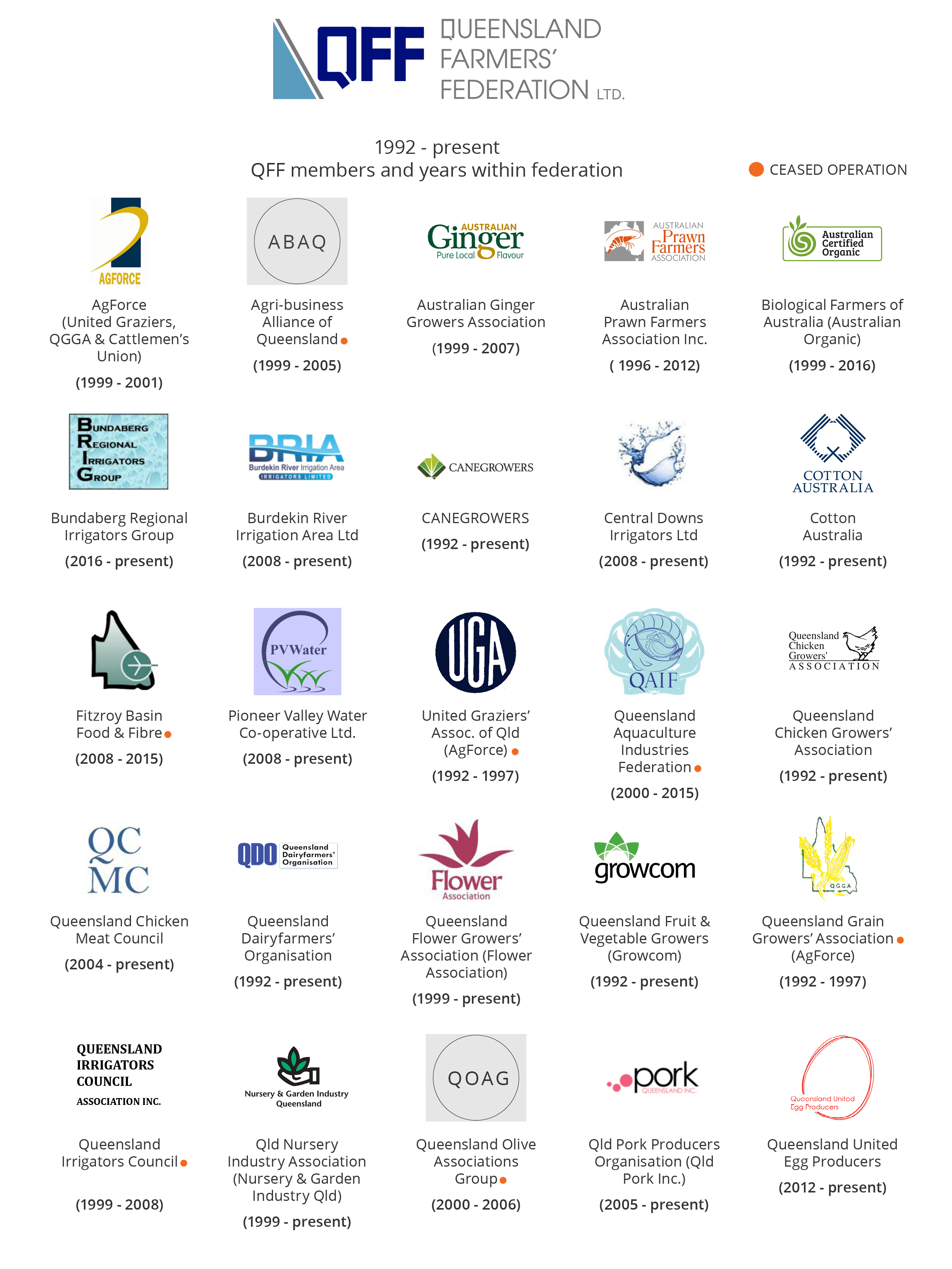 If you found this article helpful, we think you'll love these
16 Jun 2022
Agriculture Workforce Plan

Register now for the Agworkforce Summit