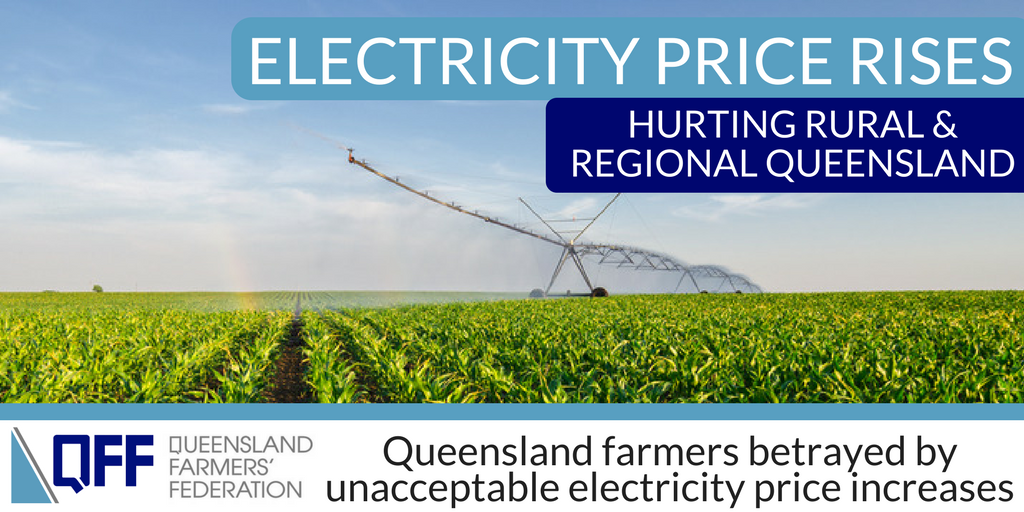 Rural and regional Queensland have today been betrayed and letdown as the Queensland Competition Authority (QCA) delivered its final determination that electricity prices would yet again significantly increase for 2017–18.

The final version of the QCA Regulated Electricity Price determination released today outlined yet another year of above consumer price index (CPI) increases.

“In the QCA draft determination our sector was assured that price increases for irrigation tariffs (62, 65 and 66) would be in line with the CPI at 1.7 – 1.9%. Instead farmers have been slugged with increases on their electricity bills of up to 10.3%; four and half times more than CPI.”

“Queensland farmers have been slugged with consecutive unsustainable electricity price increases for over a decade.”

A few hours after the QCA release of the price determination, Treasurer Cutis Pitt shared regional Queensland outrage at the stated increases and has directed the QCA to revisit its figures and make a final price determination on 16 June 2017.

“We acknowledge and thank the Queensland Government’s commitment not to pass on the full increase, however the continued uncertainty remains a frustration for our entire sector,” said Mr. Armitage.

“Despite the assurances from our politicians, there appears to be no reprieve from these unsustainable price increases.”

“Some of our farmers now face the reality that the only way to keep their businesses viable is to abandon the grid, which negatively impacts all remaining customers.”

“When governments fail to offer solutions, solutions are forced upon industry.”

“The issue of electricity prices is not confined to one level of government or one political party. It is a systemic failure of the highest order that permeates all levels of elected officials and government mechanisms.”

“QFF and industry members will have a lot more to say on this issue that is crippling our industry and communities as we head into the upcoming state election.”

“QFF will be holding all political parties to account on what they can do and their commitments on how to properly address rising electricity prices in Queensland.”

“The time for talk and excuses is over. Rural and regional Queensland needs answers and action now.”