The farm produces around 7,000 tonnes of hay per annum with an irrigation system consisting of one centrifugal pump, pumping water from a reticulation system to a centre pivot. 95% of the electricity consumption on site is due to pumping. The farm is currently using the obsolete Tariff 62, pumping at night during off-peak times, which has been recommended to change to tariff 20.

After talks between the auditor, electrician, and the farmer, the site’s best efficiency and production outcomes were determined. The solar system has been designed to cover the load expected by the pump with any allowable export to the grid.

The 39.6 kW Solar array with 30kW inverter capacity has been arranged in an East-West configuration. As the irrigators run for long periods, the panels facing East will get to maximum capacity earlier in the morning, and the panels facing West will produce maximum power in the afternoon, providing constant supply throughout the day.

As the inverter capacity is no larger than 30kW, the system was treated as a micro embedded generating unit keeping the connection process simple and meaning the farm can still export during times of no irrigation. Maintaining grid connection allows the irrigator to draw grid power when required.

The auditor recommended that the farm move to a flat rate Tariff 20 and shift pumping to daylight hours while the solar PV system produces enough energy. Implementation of solar PV will absorb the increased tariff rate and any potential price increases in the future, reducing the overall energy costs and consumption.

The farmer has implemented the Solar PV system and a Variable Speed Drive to reduce the speed of the motors due to high pressure delivered by the pump, causing leakages in the pivot system. The farmer has also switched to tariff 20. Further, ‘time’ efficiency measures have been achieved using automation on the centre pivot. With the main farmhouse around 10 minutes from the irrigator, regular drives are required to start and stop its operation. Additionally, the automation will reduce fuel usage and allow time to be better spent on the crop. Should the centre pivot stop working, an SMS is sent to a mobile device alerting the operator.

The lower cost savings measured compared to the estimated have been affected by the high amount of energy exported to the grid and the low 2020 feed-in tariff. Only 29,756 kWh or 41% of total generation are being used onsite valued at $6,474, and 42,504 kWh are being exported to the grid with a revenue of $3,341. Considering that 30,676 kWh  – 52% of the total energy used onsite – are being imported from the grid at a cost of $6,674, there are significant potential savings from shifting consumption into the solar generation period. The total power balance of the farm, including solar exports and the energy cost distribution, are shown in the following figures. 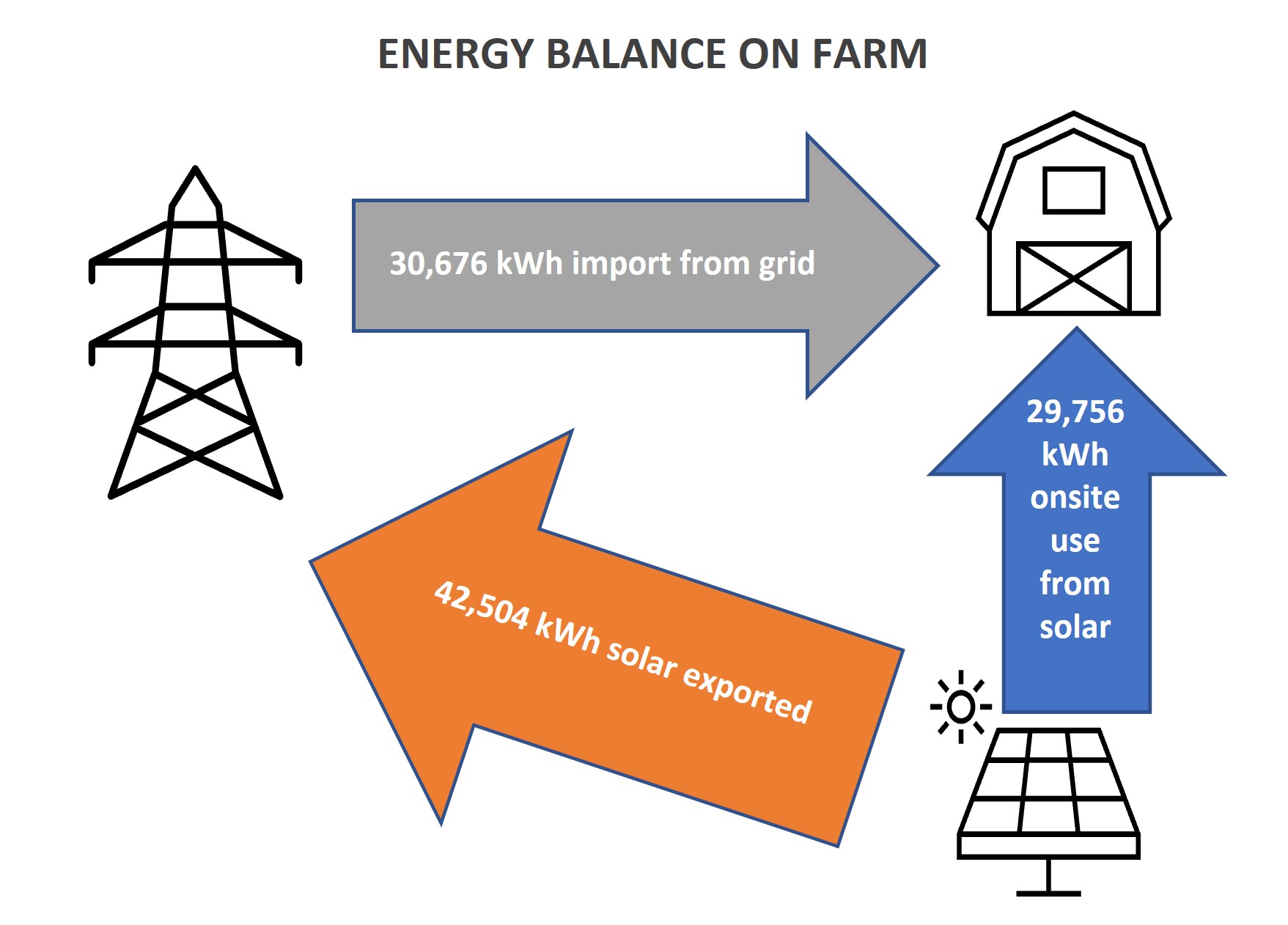 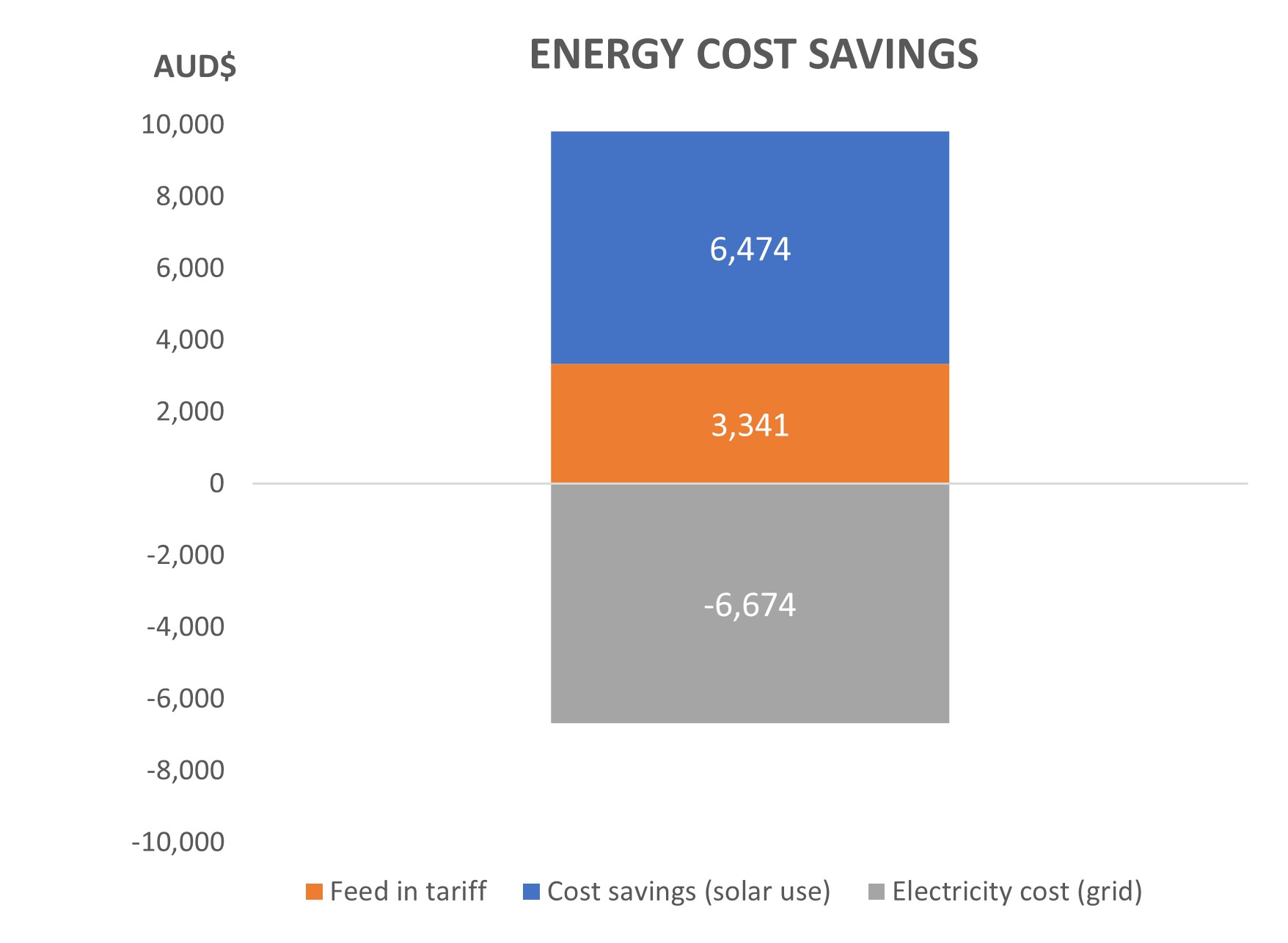 The next step for the farm is to adjust energy usage to offset as much energy consumption as possible from the grid, which would lead to further cost savings. The revenue from feeding into the grid is lower than the cost savings from using the energy onsite: for every dollar of energy exported, more than $4 could be saved if the energy were consumed onsite. If the farm were to shift 30,676kWh of energy consumption per year to coincide with solar generation times, they would save an extra $4,263 per year.

By implementing the recommendations in the audit, the farm has reduced energy consumption by 113%, including the energy exported to the grid, and costs by 70%, including feed-in revenue, with Carbon emission savings of 57.6 tCO2-e per year.

The accuracy of the recommendations in the audit, coupled with the specialist electrician’s advice, provided the best possible outcome for the farm. Energy consumption from the grid could be further reduced by matching pump use with solar generation.