The farm consists of 8 ha with a production area covering 4ha, which are irrigated all-year-round producing around 500,000 units per ha per year.

The auditor identified that the solar system was producing around 75% of its potential due to the suboptimal orientation of the panels and the need for cleaning. Pump efficiency was calculated at 6.3 kWh/ML/m head, lower than the industry benchmark as the operating pressure has been set at a lower point to minimise breakages in pipelines due to low pressure in some areas of the mainlines.

Upgrades to improve irrigation efficiency are planned, which will result in an estimated 4,400 kWh increase in electricity consumption per year due to the energy required to pump more water at higher pressures, with consequent increases in pumping costs and improvements in plant growth.

The auditor also identified some immediate no cost or low-cost maintenance measures as follows:

The nursery has proceeded with the implementation of the 20 kW Solar PV. The savings made have been measured in a Measurement and Verification (M&V) process, as outlined in Table 2.

Table 2. Estimated and Actual energy and cost savings from the 20kW Solar PV.

Energy savings have been reduced by 9% given an orientation of the panels, which have been arranged on a roof facing west, and additionally, it has been influenced by an 11% decrease in the average solar radiation received at this location, which has also limited. The lower feed-in tariff offered in 2020 compared to the evaluated in 2018 has also reduced the estimated cost savings of the system.

The farm’s energy consumption increased by 35% during 2020 from an increase in production and the addition of a second pump to support it. Of that, 26,068 kWh at a cost of $6,063 are sourced from the grid.

From the energy generated by both solar systems, 24,595 kWh or 68% of total generation are being used onsite valued at $5,720, and 11,516 kWh are being exported to the grid with a revenue of $905. Considering that 26,645 kWh – 52% of the total energy used onsite – are being imported from the grid at a cost of $6,197, there are significant potential savings from shifting consumption into the solar generation period. The total power balance of the farm, including solar exports and the energy cost distribution, are shown in the following figures. 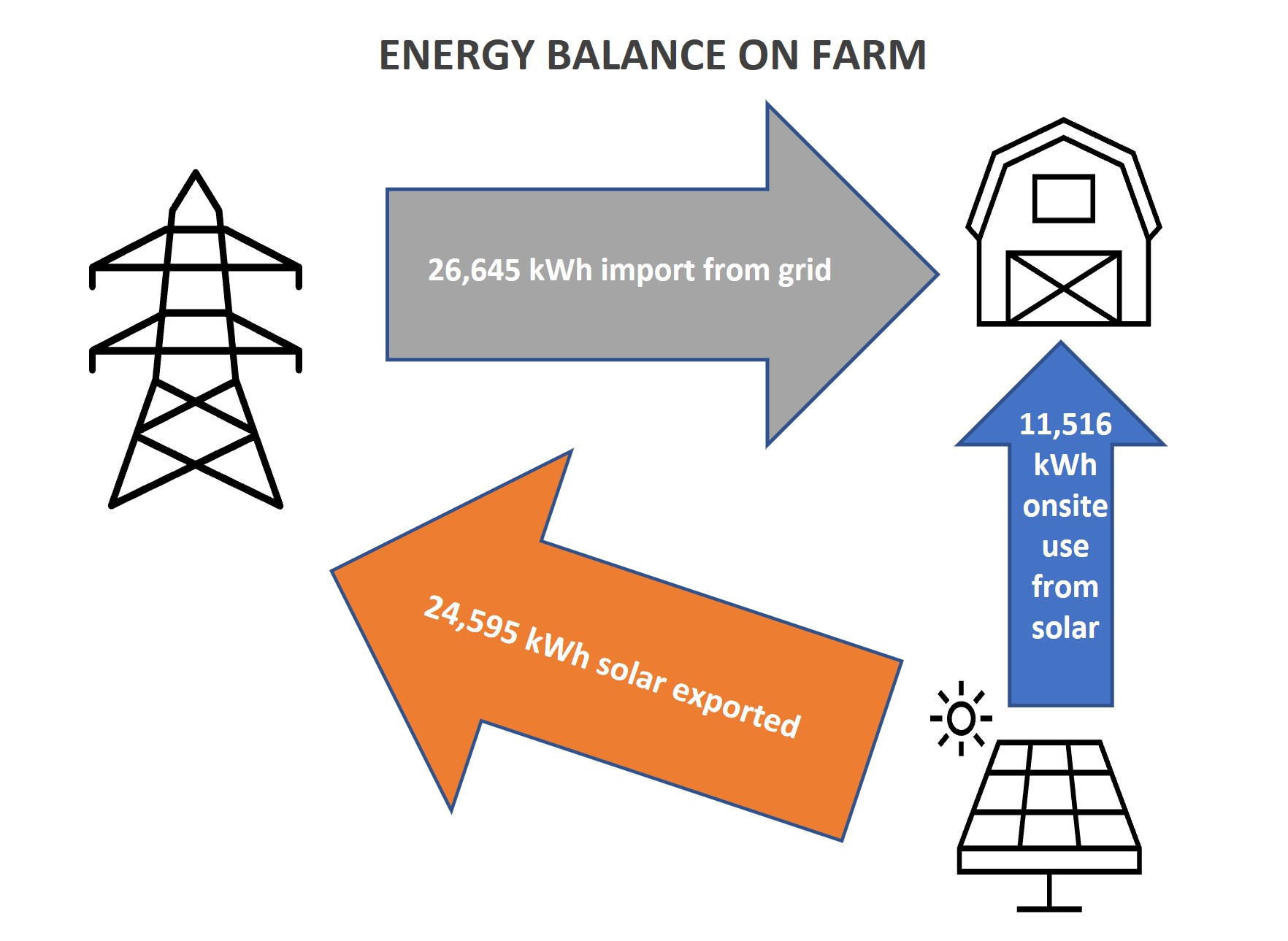 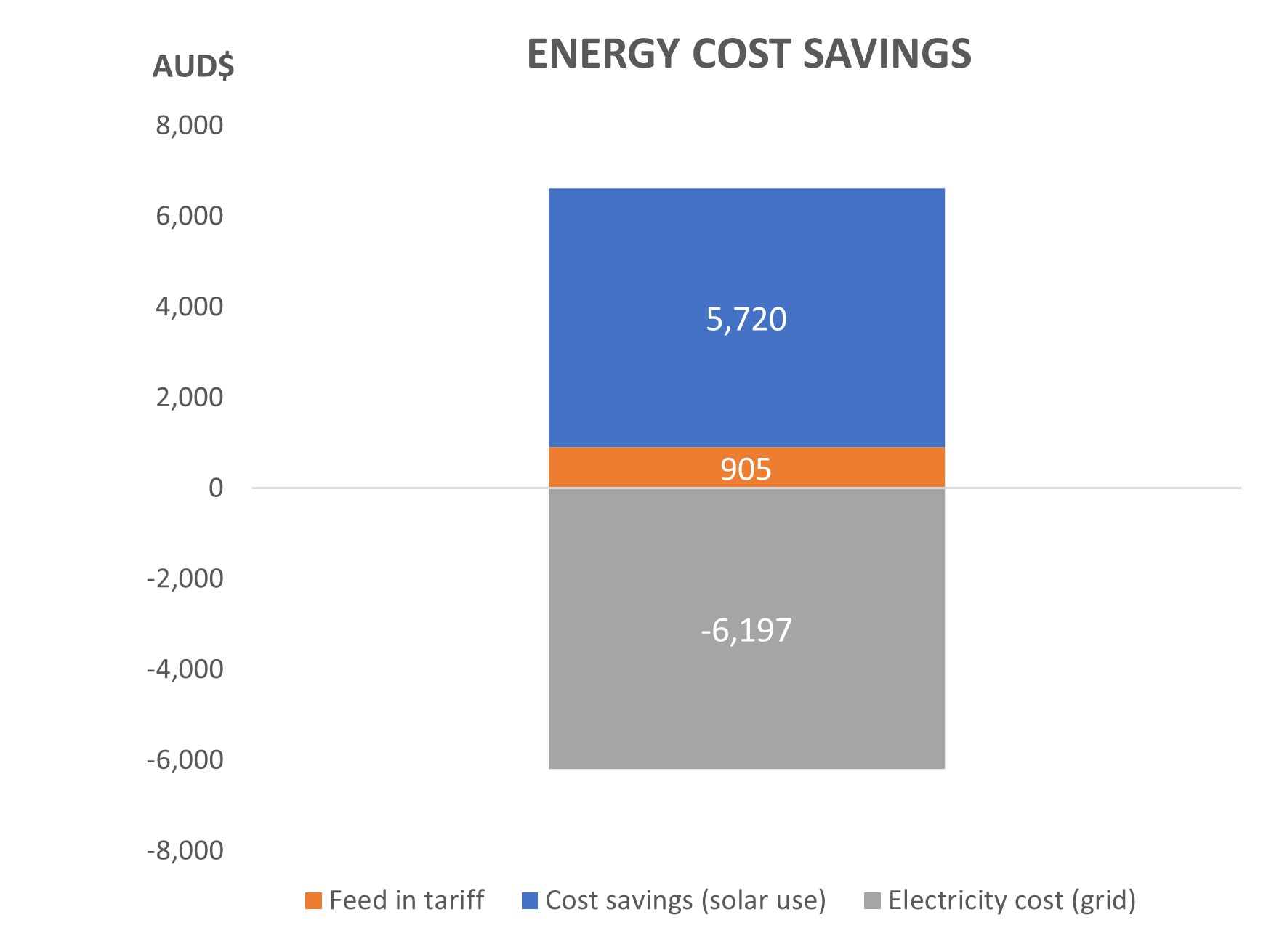 The next step for the farm is to adjust energy usage to offset as much energy consumption as possible from the grid, which would lead to further cost savings. The revenue from feeding into the grid is lower than the cost savings from using the energy onsite: for every dollar of energy exported, around $2 could be saved if the energy were consumed onsite. If the farm were to shift 11,516kWh of energy consumption per year to coincide with solar generation times, they would save an extra $1,773 per year. 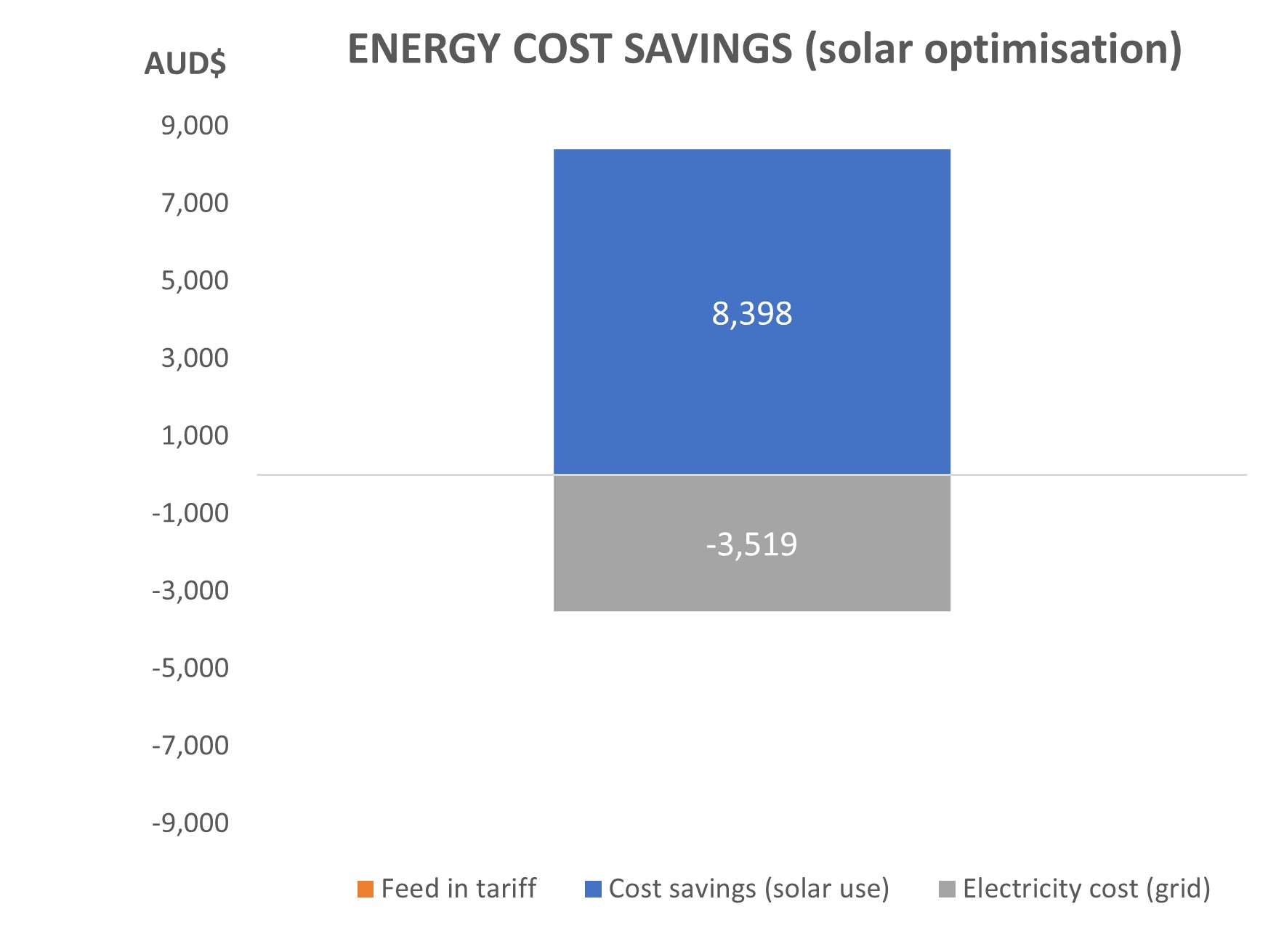 From the implementation of recommendations in the audit, the farm has reduced energy consumption by 53% and costs by 61%, including feed-in revenue, with Carbon emission savings of 21.9 t/CO2-e per year.