The Energy Audit at Merivale Farms in the Southern Downs investigated electricity and gas consumption and identified opportunities to reduce costs significantly. The piggery has saved money and reduced energy consumption after implementing a 39.36 kW solar PV system.

“The Energy Saver Program was excellent in showing us the current technologies available and the savings that can be easily made. We implemented the change to LED’s and built a 30kW solar farm and both within 2 years paid for themselves. The use of solar also moved us from a large power consumer to a small which has allowed us to achieve more savings on different tariffs available to small consumers. We have recently got quotes to change our main bore to solar for even greater savings”

The site farrows and weans pigs before transporting them to a larger site for finishing. The site has several sheds for different rearing stages, two houses, a small office, and two pumps.

The farm could save electricity onsite from recommendations in the audit:

Table 1. Costs and savings from audit recommendations with quick payback.

Under current tariff 62, the annual cost savings of $10,990 from replacing the lights could be utilised to install an adequate solar PV system.

Table 2. Costs and savings from audit recommendations with longer payback.

Assuming the bore pump is on load control tariff 33, an initial solar system is recommended to cover the load, showing a four-year payback. Should battery pricing decrease, then the second option may be worth considering. It would be worthwhile to factor this when designing a system using a battery-capable invertor.

Solar systems greater than 30kW are subject to a more complex network connection process, so installing the 30kW system would prove beneficial at this stage. The audit recommended remaining on tariff 62 as the system shows better payback. The farm will be required to move to Tariff 20 when the obsolete tariffs cease.

Implementation of the recommendations at the piggery will ensure that the farm is able to remain a small electricity user on small business tariffs.

The farmer has proceeded with the installation of a 39.36 kW ground-mounted solar system with 2 x 15 kW inverters (pictured above). The energy and cost savings made have been measured in a Measurement and Verification (M&V) process, as outlined in Table 4.

The greater savings obtained from the M&V calculations compared to those estimated in the audit may have been influenced by the larger system implemented. No additional factors have been identified, such as higher solar radiation during the measurement period or optimisation of the orientation of the panels.

From the solar generation, 74% or 56,489 kWh are being used onsite valued at $13,136, and 19,793 kWh are being exported to the grid with a revenue of $1,556. Considering that 59,743 kWh – 51% of the total energy use onsite – are being imported from the grid at a cost of $13,893, there are significant potential savings from shifting consumption into the solar generation period. The total power balance of the farm, including solar exports and the energy cost distribution, are shown in the following figures. 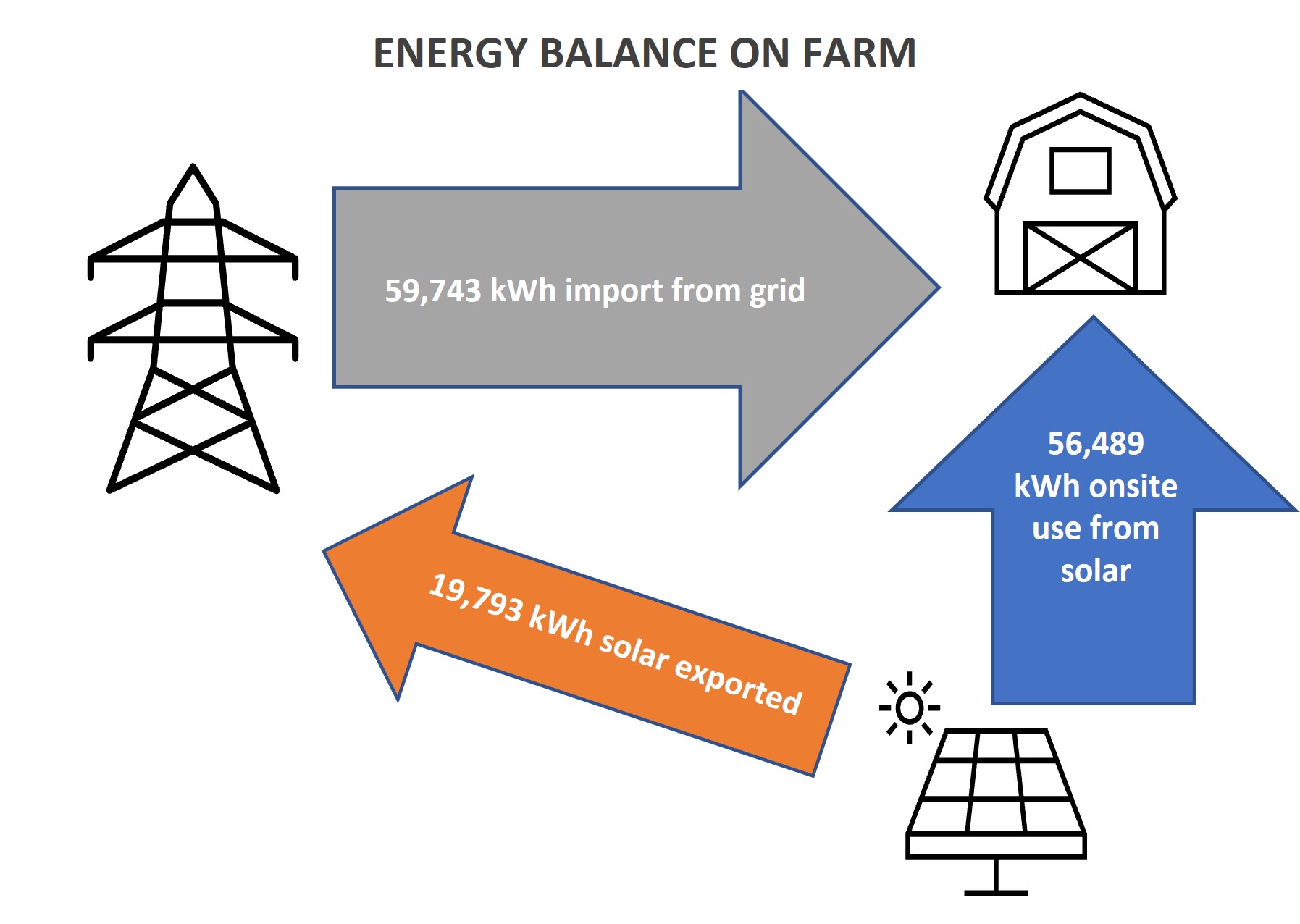 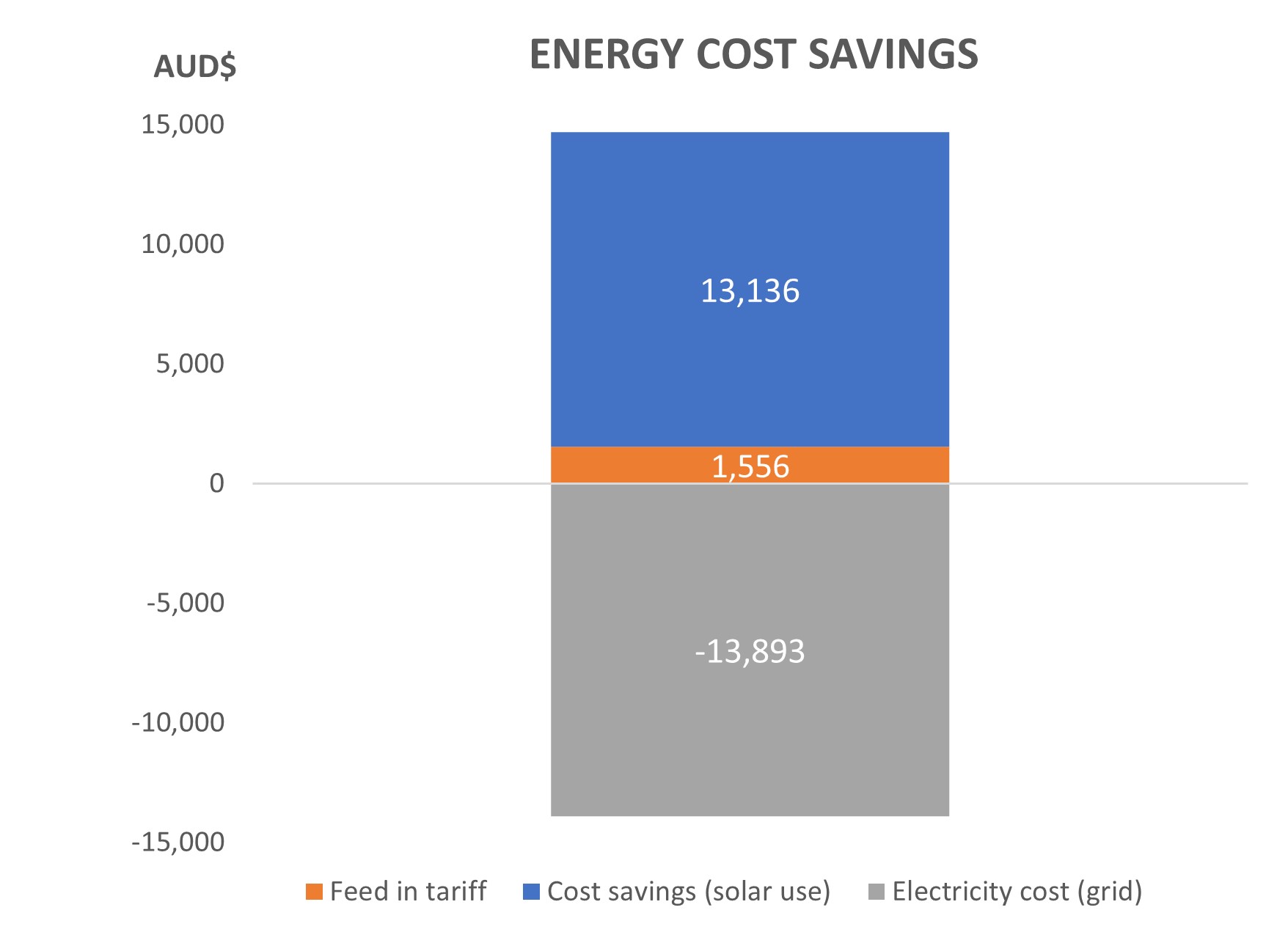 The next step for the farm is to adjust energy usage to offset as much energy consumption as possible from the grid, which would lead to further cost savings. The revenue from feeding into the grid is lower than the cost savings from using the energy onsite: for every dollar of energy exported, more than $3 could be saved if the energy were consumed onsite.  If the farm were to shift 19,793kWh of energy consumption per year to coincide with solar generation times, they would save an extra $3,047 per year. 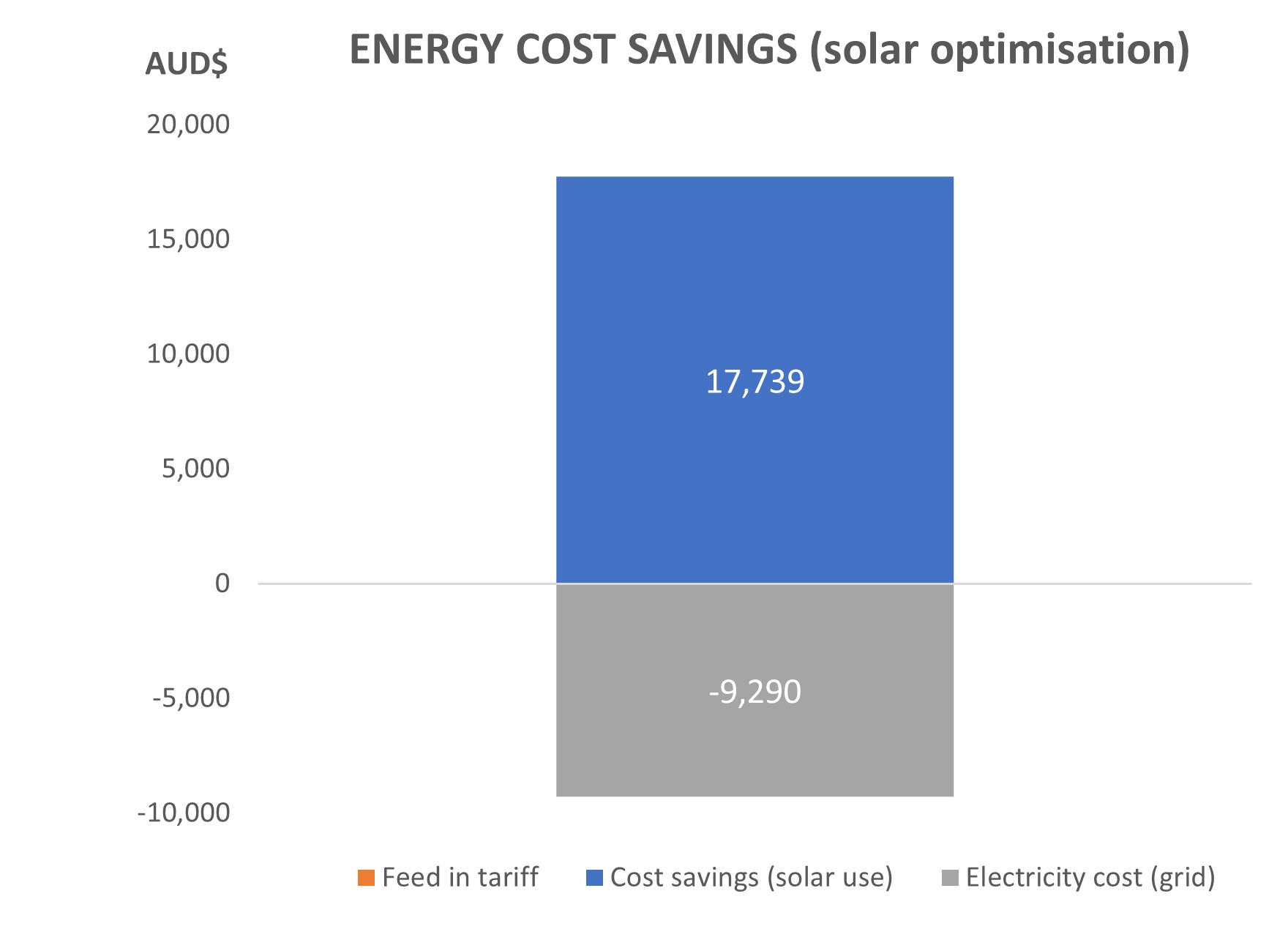 From the implementation of the recommendation in the audit, the farm has reduced total energy consumption by 54% and cost savings by 33%, including feed-in revenue, with Carbon emission savings of 61.8 t/CO2-e per year.

The audit identified a number of cost-effective initiatives onsite that could reduce gas consumption by 1,083GJ per annum with emission savings of 56 tCO2-e, including the items in the table below:

The audit considered the opportunity to install a biogas facility capturing and recycling gas produced from the piggery. This would reduce the high costs attributed to LPG, though due to production numbers, biogas production is limited and is not recommended unless the piggery expands into the future. At a cost of $400,000 and a potential payback of 5.3 years, the biogas is more a long-term consideration depending on the future direction of the farm.

Implementation of all the recommendations from the audit would significantly reduce LPG gas consumption and costs per unit of output by 52%, with new KPIs seen. A further 28% reduction in LPG could be achieved should the farm capture and use biogas.

The farmer has not proceeded with any of the gas-saving recommendations. However, in the measurement and verification process, an alternative solution to save gas was identified and recommended for future implementation. The installation of an electric heat pump to replace the current water heating system consisting of 4 heaters of 275 L could lead to a reduction of $5.12 per hour per heater at a capital cost of $43,000.

With LPG costs considerably larger than electricity, the farm should consider low-cost recommendations to allow additional capital expenditure to implement some of the larger energy-saving measures. There are significant electricity savings to be realised onsite, leading to reduced KPIs.