This Darling Downs cattle property finishes cattle using supplementary grain and forage crops. The farm includes a number of stock watering systems, both solar and diesel, as well as a feed mill, cattle press and houses.

This case study will focus on the assessment of a solar PV system implemented at the farm.

The farm is a cattle feedlot with supplementary crops of grain and hay. To supply the cattle with food and water, the farm contains the following systems:

A recent energy audit showed how improving the current systems can lead to energy and cost savings. The audit recommended to install:

Based on that, the farmer has proceeded with the implementation of a 17kW Solar PV system to offset the electricity consumption in the mill. The savings made have been measured in a Measurement and Verification (M&V) process, as outlined in Table 2.

The lower cost savings measured compared to those estimated from the audit recommendation have been influenced by an approximated 13% reduction in the retail price of electricity plus a lower than expected correlation between solar generation and mill run-time. If the farm were to shift more of their daily electricity consumption to the middle of the day, the savings would increase.

From the solar generation, 73% or 25,710 kWh are being used onsite valued at $5,980, and 9,470 kWh are being exported to the grid with a revenue of $744. Considering that 29,290 kWh – 53% of the total energy use onsite – are being imported from the grid at a cost of $6,737, there are significant potential savings from shifting consumption into the solar generation period. The total power balance of the farm, including solar exports and the energy cost distribution, are shown in the following figures. 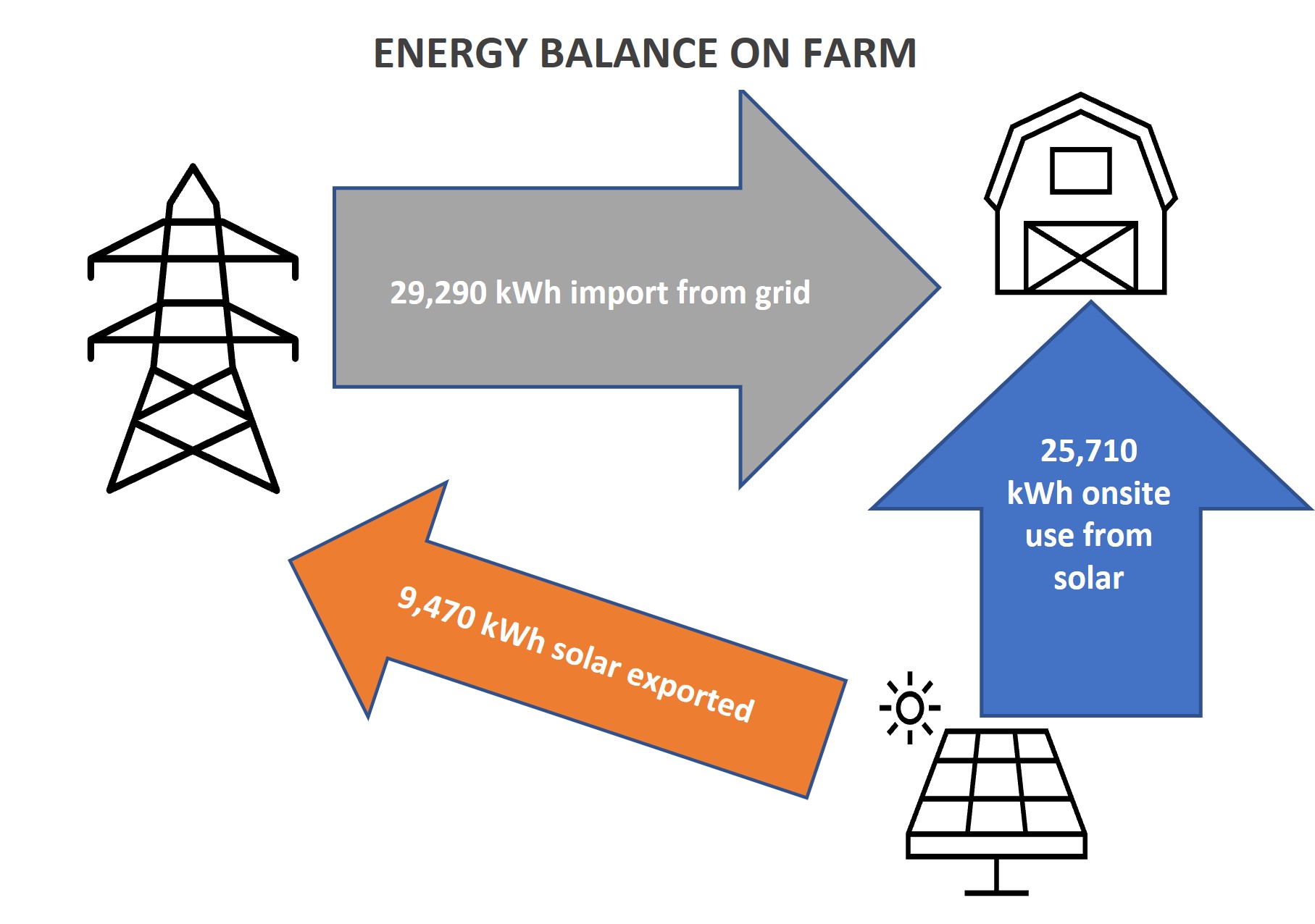 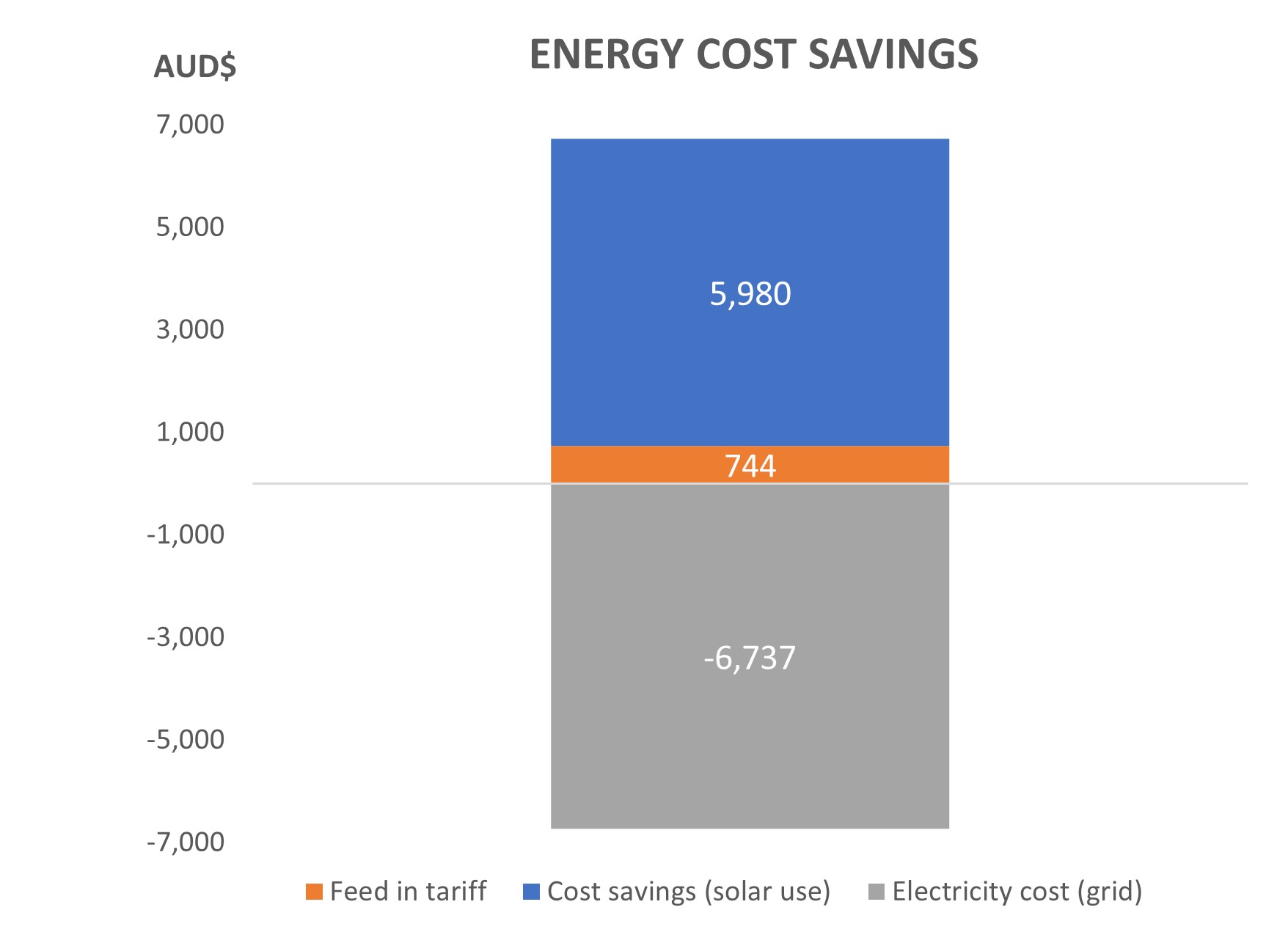 The farm has also implemented another electric bore pump on a separate NMI to help fed water to the header tank, which has reduced the need for a PV assisted system for the diesel Genset bore. Since the new pump has increased the cost of electricity, the farm is looking into a solar system for that NMI.

The next step for the farm is to adjust energy usage to offset as much energy consumption as possible from the grid, which would lead to further cost savings. The revenue from feeding into the grid is lower than the cost savings from using the energy onsite: for every dollar of energy exported, around $2 could be saved if the energy were consumed onsite. If the farm were to shift 9,470kWh of energy consumption per year to coincide with solar generation times, they would save an extra $1,434 per year. 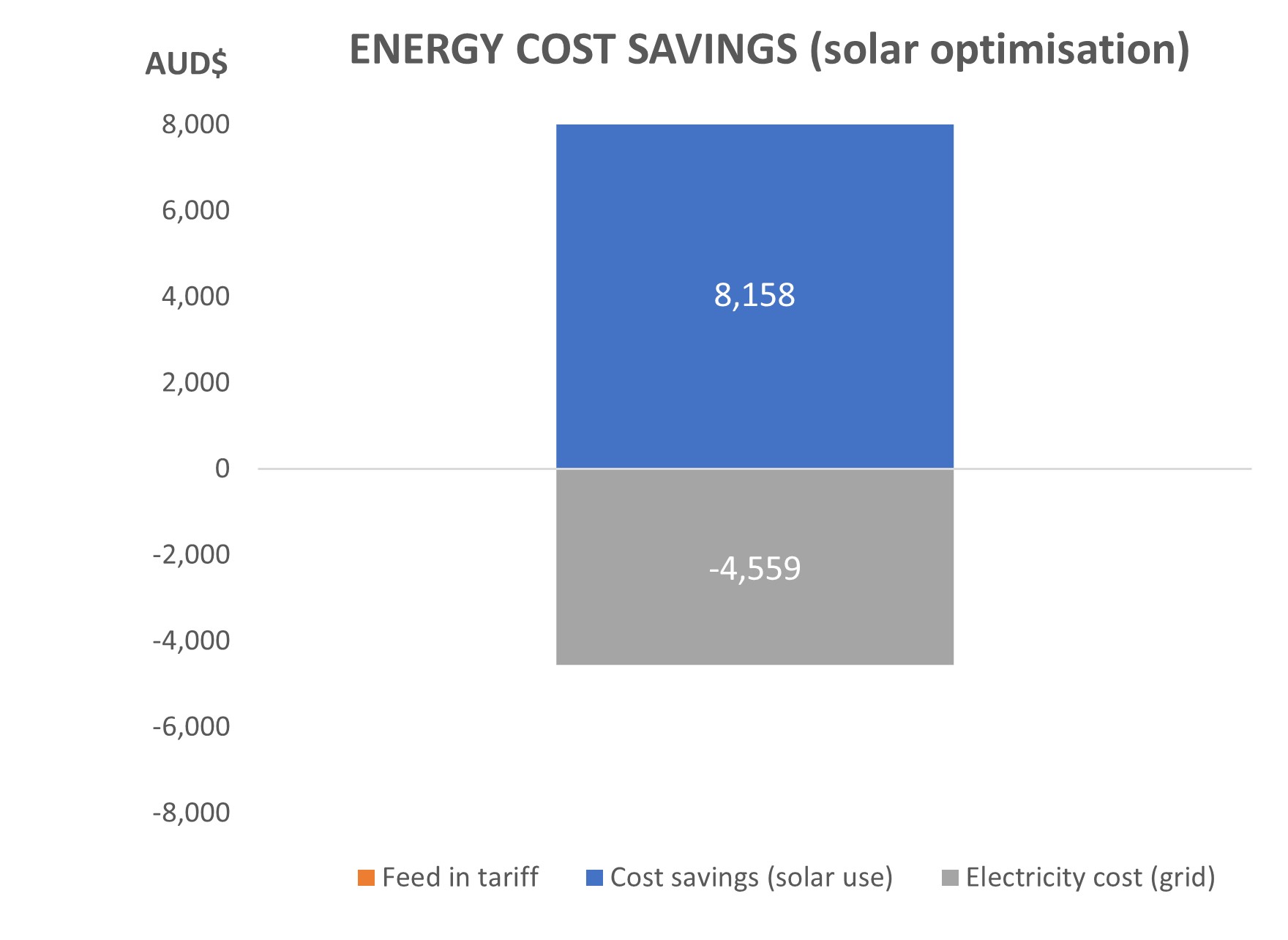 From the implementation of recommendations in the audit, the farm has reduced energy consumption by 64% and costs by 40%, including feed-in revenue, with Carbon emission savings of 28.5 t/CO2-e per year.

An energy audit is a great way for a business to cut costs and boost productivity. Find out what’s involved in an energy audit HERE and subscribe to our bi-monthly energy e-news HERE.